After a brief rally after the Federal Reserve announced its historic decision, markets ended another choppy week in the red, battered by plummeting oil prices and rocky investor sentiment. For the week, the S&P 500 lost 0.34%, the Dow dropped 0.79%, and the U.S. Corporate Bond Index fell 0.52%.

If you're one of the millions of Americans who have better ways of spending time than watching the Federal Reserve, you may be wondering what will happen now that the Fed has voted to raise interest rates last week for the first time since 2006.

In her remarks, Fed Chair Janet Yellen said that the Fed believes that the recovery has come a long way and that the economy is ready for a "modest increase" in interest rates. The chart below will help put the rate increase in perspective: 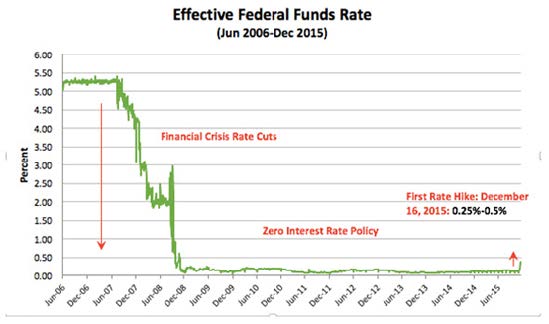 After years of historically low rates, the Fed voted to raise rate targets by just a fraction of a percent. Though we don't have definitive information about the pace of future rate increases, some experts believe that the Fed is likely to raise rates several more times in 2016 and 2017, assuming the economy remains on track for growth. Even if the Fed continues to raise rates regularly, it will take years to get back to historically average rates.

We can expect the coming weeks to be volatile for both stocks and bonds as investors adjust to the new rate environment. Historically, markets have experienced volatility after rate increases. However, as we showed in our update last week, stocks and bonds usually experience positive returns in the initial years after the Fed begins tightening policy. That being said, the past doesn't predict the future exactly, and we'll be closely monitoring markets in the weeks and months to come.

Bottom line: The Fed rate raise is not necessarily a bad thing. The hike underscores the fact that the U.S. economy has made tremendous progress in the last 7 years. However, the raise also comes at a time when millions of Americans are underemployed, inflation is still below targets, and global headwinds are blowing in the face of U.S. firms. Realistically, there was never going to be a perfect time to raise rates, and it's clear that the Fed is planning to take a gradual approach to future hikes. One of the important questions to be answered is -- can the economy maintain its pace of growth without the Fed's foot on the accelerator? We'll see how the data unfolds and adjust to market conditions as warranted.