Strategists continue to wonder what the Fed is thinking about the future of short term interest rates. Minutes from the July Federal Reserve Open Market Committee meeting showed that officials are split about the economic outlook and when to raise rates. Public comments from Fed members who favor a rate hike soon could push the central bank into raising rates as early as September. At the same time, other officials aren't convinced that tepid inflation will rise to the Fed's 2.0% objective and favor a wait-and-see approach to raising interest rates.

After several months of strong labor market gains, some economists think the economy is close to full employment and central bankers should move soon to put on the brakes by raising interest rates. If the economy gets overheated, prices could rise too much and push the economy into a boom/bust cycle that federal officials are anxious to avoid.

While a few years of outsized growth might sound nice after the years of slow expansion we've experienced, the economic hangover that might follow could be unpleasant. That's why central banks like the Fed attempt to smooth out these economic cycles by lowering interest rates when times are tough (boosting investment through cheap credit) and raising them when growth picks up again (curbing excessive optimism by making credit more expensive).

The timing of rate increases is tricky, and the macroeconomic relationships that govern these decisions are complex and open to wide differences of interpretation. This is why some of the best economists in the world can't agree on when to pull the trigger.

Which group will win out at the Fed? Since the Fed has been reluctant to jump the gun on interest rates, it seems unlikely we will see a rate hike coming next month, especially with the election right around the corner.

Currently, Wall Street traders judge the odds of a September hike at just 18.0%. However, traders think the Fed is likely to raise interest rates later in 2016, judging by December's rate probabilities. 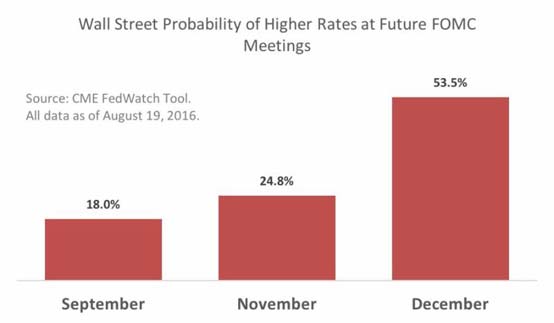 This week is packed with economic data that will show us how the housing and manufacturing sectors are doing. We'll also get a second look at second- quarter economic growth in Friday's Gross Domestic Product report.

As always, we will keep you updated as things progress.