Home > Blogs > What Did the May Job Report Show Us?

What Did the May Job Report Show Us?

On Friday, we got a look at how the labor market did in May. Analysts looked to the report to see whether the labor market would give the Fed the ammunition it needed to move at the June meeting. Here are a few things we took away:

Job growth disappoints...but it has happened before

The economy created just 38,000 new jobs last month, the worst showing since September 2010. The number of new jobs sharply missed expectations, which called for around 160,000 new jobs.  However, seasonal factors, like a massive Verizon worker strike, which took 34,000 workers out of the count, were at play and may have affected hiring numbers. 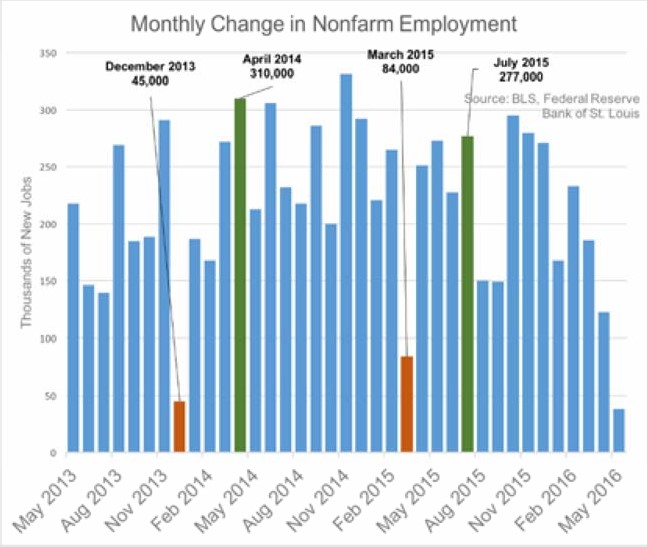 The jobs report showed that the unemployment rate fell to 4.7%, the lowest since November 2007. However, much of the decrease occurred when jobseekers dropped out of the job search. As we approach full employment (some may argue that we're already there), the effects of having fewer jobseekers begin to be felt by employers. Employers who are hiring may struggle to find qualified candidates due to skill mismatches, a problem that's likely to continue to affect certain industries.

Can the slower pace of hiring support the consumer spending the economy needs to grow? Perhaps, if wages continue to grow. Wages were up 2.5% in May as compared to a year ago, which is a better pace of growth than we have seen. Another measure of wage growth favored by economists, the Employment Cost Index (ECI), shows that wages were up 2.4% (year-over- year) in the first quarter. A third measure calculated by the Atlanta Fed shows a rosier 3.4% annual increase in hourly wages in April. You can bet that the Fed will be looking at all three measures when deciding if wage growth is strong enough to support consumer spending this year.

The Fed may not raise rates in June

The weak report also may have reduced the odds of a June interest hike by the Federal Reserve, though some analysts think that other positive economic indicators might give the Fed the confidence to act. Right now, the market is pretty convinced the Fed won't raise rates in June; one measure shows that the current market probability of a June hike is just 3.8%, while the probability of a July hike is 31.3%. 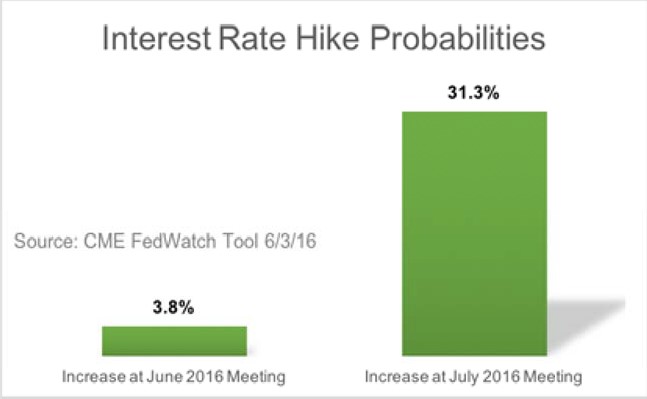 Overall, does the weak May jobs report signal weakness in the U.S. economy? Perhaps, though it's far too soon to sound the alarm. Since other economic indicators like Gross Domestic Product growth, housing market activity, and personal spending all point to positive growth, it's not likely that one weak report spells disaster for the economy. Rather than fixate on a single piece of data, it's more important to look at overall economic trends.

Looking ahead, it will be important to see how investors react to the dismal jobs report and perhaps hit the brakes on the three-month rally we've experienced. Summer tends to be a slow season for markets as many traders take time off and stocks can overreact to headlines. A small pullback in the weeks to come wouldn't surprise us, though traders could also shrug off the report. While weak data always sidelines some short term traders, long-term investors (and their advisors) should focus more on the opportunities that are created by short-term market swings. As always, we'll keep you updated.